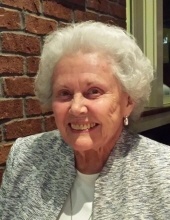 Jeanne Coble Jones, age 92, of Lewisburg, TN, passed away on Monday, March 9th, 2020. She was born in Birmingham, AL, on December 16, 1927, to James Grady Coble and Mayme Barlow Coble. Her father, a civil engineer, moved the family to various cities in Tennessee as he oversaw road construction projects.

After graduation from Marshall County High School, she attended Stephens College in Columbia, MO. Upon the unexpected death of her father in 1946, she returned home to help care for her younger siblings. She later attended business college in Nashville and spent the remainder of her life in Lewisburg.

In 1949, she married the love of her life, James M (Buddy) Jones, to whom she was wed for over 61 years. She operated a kindergarten in Lewisburg in the 50’s. She was a devoted wife and mother to her four daughters. Her favorite past times included tennis, dancing, playing bridge, birdwatching, and camping and hiking, especially in the Great Smoky Mountains. She was a talented seamstress and an avid gardener, as well. As a member of the local garden club, she learned to arrange flowers and, subsequently, she became known as the “Flower Lady” at her church where she provided fresh flower arrangements from her garden for services each week. In later years, she and Buddy enjoyed traveling with a group of friends who were affectionately known as “The Golden Ponders.”

In lieu of flowers, memorials may be made in Jeanne’s memory to the charity of your choice.

Bills-McGaugh & Hamilton Funeral Home & Crematory is assisting the family with arrangements. Condolences may be extended to the family online at www.billsmcgaugh.com.
To order memorial trees in memory of Jeanne Coble Jones, please visit our tree store.