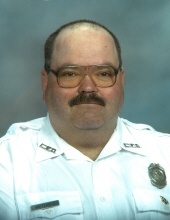 Funeral Services will be conducted at Bills-McGaugh & Hamilton Funeral Home on Tuesday, August 17th at 2:00 PM with Brother Rick Rolin and Mike Whitehead officiating. The family will visit with friends on Tuesday from 11 AM until service time at the funeral home. The family will be having a Celebration of Life Service at a later date. Honorary pallbearers include the members of the Lewisburg Fire Department. In lieu of flowers, if you wish you may make memorial contributions to a charity of your choice.

A Marshall County native, he was born on September 12, 1966 to the late Flossie Mae Whitehead. He was a longtime employee of the State of Tennessee. Gooch later served as a devoted fireman for the City of Lewisburg, until stepping down due health reasons. He went on to work for Lewisburg Public Works Department; were he later retired due to his health. Gooch had a wonderful personality and the ability to make people laugh. He deeply loved his family and friends, and his “furbabies”: West Side, Simba, and Odie. Gooch lived his life with the motto of “Live your life, eat, and be happy”. Mr. Whitehead was a member of Westvue Church of Christ.

In addition to his mother, he is preceded in death by his paternal grandparents, Odie Whitehead, Sr. and Dorothy Chilton Whitehead; special aunt, Mary Frances Chilton; several aunts and uncles; and mother-in-law, Joyce Fagan.

BILLS-MCGAUGH & HAMILTON FUNERAL HOME is honored to assist the family with arrangements. Condolences may be offered online at www.billsmcgaugh.com.
To order memorial trees in memory of James "Gooch" Whitehead, please visit our tree store.