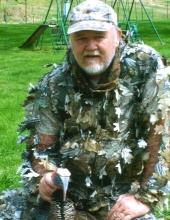 Born on January 8, 1954, he was the son of Emily Spray Tate and the late James Tate. Eddie was an avid outdoorsman; he enjoyed hunting, fishing, farming, tending to the cows, and playing horseshoes. He loved his family deeply and enjoyed spending time with them. Eddie was a member of the Church of Christ faith.

In addition to his father, he is preceded in death by a son, James Edward Tate II and daughter, Misty Ann Tate.