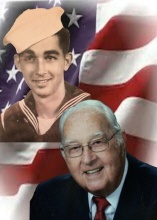 Jack Edward Robinson, 94, died in NHC Lewisburg on January 26, 2019. He was a veteran of World War II. Jack retired from Southern Railroad in 1982. He was a member of First Baptist Church in Lewisburg.

Bills-McGaugh & Hamilton Funeral Home is assisting the family with arrangements. Condolences may be offered online at www.billsmcgaugh.com
To order memorial trees in memory of Jack Robinson, please visit our tree store.