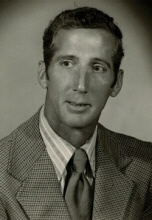 Jack L. Fagan, age 87 of Lewisburg, passed away on Friday, October 4, 2013, in Maury Regional Medical in Columbia. A native of Marshall County, Mr. Fagan was the son of the late Roy Fagan and Macel Worsham Fagan. He was the Circuit Court Clerk from 1974 to 1994 from which he retired and was a member of First Baptist Church. In addition to his parents, he was preceded in death by his wife, Ellawayne Fagan, who passed away in 2007 and a brother, Doug Fagan.

Bills-McGaugh Funeral Home & Crematory is in charge of the arrangements.
To order memorial trees in memory of Jack Fagan, please visit our tree store.