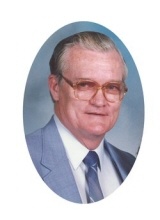 Biography
Hurshell Eugene "Gene" Michael, age 78 of 1504 Lindsey Lane, Chapel Hill, TN passed away Wednesday, August 8th, 2012 at Williamson Medical Center, Franklin, TN. Mr. Michael was a native of Berrien Co. Michigan and the son of the late Hurshell Michael and Carmen McClintock Michael. He was a retired Business Executive of the former Heil-Quaker Corp of Lewisburg. In addition to his parents, a brother Von Michael predeceased him.

Funeral services for Mr. Michael will be Saturday, August 11th, 2012 at 2:00 p.m. from the chapel of Bills-McGaugh Funeral Home with burial in Lone Oak Cemetery. Family visitation will be Friday evening August 10th, 2012 from 5:00 p.m. to 8 p.m. at the funeral home and after 12 Noon on Saturday.
To order memorial trees in memory of Hurshell Michael, please visit our tree store.