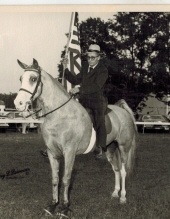 Mr. Howard G. Griggs, age 89, of Lewisburg, TN went to be with the Lord on Thursday, February 18, 2016 at the Marshall Medical Center. Howard was the son of the late Henry Grady and Katie Porterfield Griggs. He was retired from Lewisburg Machine Works as a machine operator. He was of the Baptist faith. Mr. Griggs was an avid walking horse enthusiast and a former member of the Walking Horse Breeders Association.
In addition to his parents, he was preceded in death by his wife, Thelma Jean Griggs in 2014 , a sister, Julia Williams and grandson, Christian Burk.
Survivors include 2 sons, Robert Wayne (Angie) Lasater of Cornersville, TN and Kevin V. Burk of Lewisburg, TN, one daughter, Elvonda (Carl) King of Cornersville, TN, two sisters, Hila (James) Kincaid of Pottsville, TN and Junette Young of Brick Church, TN, and one brother, Neal (Faye) Griggs of Columbia, TN. Five grandchildren, three great grandchildren and many loving nieces and nephews also survive.
Mr. Griggs's body will be cremated following a visitation with family and close friends on Sunday, February 21, 2016 from 2:00 until 4:00 PM. Burial of the cremains will be in Short Cemetery at a later date.
Notes of condolences may be sent to www.billsmcgaugh.com.
Bills McGaugh Funeral Home and Crematory is in charge of the arrangements.