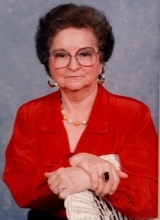 Biography Mrs. Hester A. Cox, age 93 of Moulton, Alabama and former longtime resident of Lewisburg, passed away on Thursday, August 02, 2012 at NHC in Moulton, AL.

A native of Bruceton, TN, she was the daughter of the late Ellie Sanders Allen and Icom Allen. She was retired from Genesco as a shoe maker and a member of the First Cumberland Presbyterian Church.

In addition to her parents, she is preceded in death by her husband, Oren Cox, a daughter, Sharon Woods and one grandchild, Keith Haislip.

Visitation with the family will be two hours prior to the graveside service at Bills-McGaugh Funeral Home on Saturday.

In Lieu of flowers, donations can be made to the American Cancer Society C/O Susie Boatright, 2382 Lynnville Highway, Cornersville, TN 34047.

Condolences may be sent to the family at www.billsmcgaugh.com

Bills-McGaugh Funeral Home is in charge of the arrangements.
To order memorial trees in memory of Hester Cox, please visit our tree store.