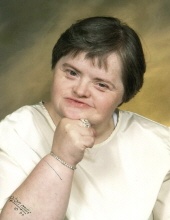 Hellen Irene Smith, after a long battle from Alzheimer’s related conditions, held the hand of Jesus as she passed through the Golden Gates into Heaven on Tuesday, December 22, 2020. Hellen Irene Smith, almost 62 years old, was born January 15, 1959 in Leonard’s Hospital in Lewisburg.
Hellen was the daughter of the late Lola Rawlinson Smith and the late Marvin P. Smith, Sr. In addition to her parents, she was preceded in death by an infant sister, Ollie Gail Smith and her brother M. Pat Smith.
Hellen was very sociable, funny, and above all loved. Seen with LaDelle wearing a matching blouse and one of her many hats, she enjoyed riding around town, the trips to the stores, and eating out. She took delight in shaking hands, hugging children, watching TV, singing with her sister Evelyn, flowers, cards, stuffed animals, sparkling jewelry, and writing in her notebook. She loved people. In January 2019, she was recognized by the city of Lewisburg for being the oldest living female with Down’s Syndrome in Marshall County.
Hellen is survived by her “second mama” and sister, LaDelle Smith of Lewisburg, sister, Evelyn Mize and nephew, Clint Mize of Columbia, TN. Also surviving are cousins, her Church Street Church of Christ family, and a host of friends.
Bills-McGaugh & Hamilton Funeral Home, Lewisburg, TN is in charge of the arrangements with visitation being held on Wednesday, December 23rd from 4:00 – 7:00 PM and the funeral service will be Thursday, December 24th at 11 AM . Burial will follow in Lone Oak Cemetery in Lewisburg, TN. Due to coronavirus (COVID-19), please wear a mask.
In lieu of flowers, donations may be made to Church Street Church of Christ Youth Program or Benevolence Programs, 305 West Church Street, Lewisburg, TN 37091.
The family would like to express a special thanks to ALL who have had a hand in Hellen’s medical care.
To order memorial trees in memory of Hellen Irene Smith, please visit our tree store.