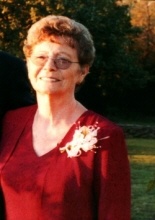 Helen Marie Rogers Hayes, age 76 of Lewisburg, passed away on Tuesday, November 18, 2014 at her residence. A native of Marshall County, Mrs. Hayes was the daughter of the late Luther Allen and Jewel McMillian Allen. She was also preceded in death by one grandchild, Richard Brian Rogers. She was a plant manager with Jama Manufacturing and a member of Howell Baptist Church.

Bills-McGaugh Funeral Home & Crematory is in charge of the arrangements.
To order memorial trees in memory of Helen Hayes, please visit our tree store.