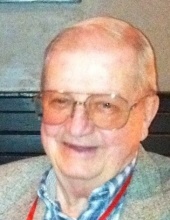 Harold Jones Wiggins, age 92, died early Sunday morning, July 2, 2017 at NHC-Oakwood in Lewisburg, TN. He lived at Village Manor Retirement Home until he lost his fight with cancer. Harold lived most of his life in Lewisburg where he was a popular retail furniture store owner for many years. He also became a mainstay at the Marshall County Recreation Center where he worked in the Pro Shop.
Harold leaves many good friends including his beloved McDonalds Coffee Club and his Pool Shooting Group. He was a Charter Member of The Elks Club and maintained his membership for 63 years. Harold was a member of the First United Methodist Church.
He was preceded in death by his parents, Clarence and Maple Wiggins, two brothers, James Wiggins, Wilburn Wiggins, his wife, Barbara June McCrory Wiggins in 1989 and a son, Phil Wiggins. He is survived by a son, Larry Wiggins, Lewisburg, TN, two sisters, Wilene Martin, Mt. Juliet, TN, Francis Hopkins, Tampa, FL, and several nieces and nephews.
Visitation with the family will be held on Saturday, July 8, 2017 from 10:00 AM until 11:45 AM in the chapel of Bills-McGaugh & Hamilton Funeral Home. A Graveside Service will begin at 12:00 Noon at the Lone Oak Cemetery, Lewisburg, TN.
Notes of condolences may be sent to www.billsmcgaugh.com.
Bills-McGaugh & Hamilton Funeral Home & Crematory is in charge of the arrangements.
To order memorial trees in memory of Harold J. Wiggins, please visit our tree store.