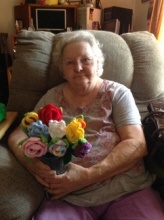 Gloria Gayle Baucom Harris, age 69 of Lewisburg, passed away on Tuesday, March 10, 2015 at her residence after an extended illness.

Mrs. Harris was a native of Bedford County, the daughter of the late Verner Baucom and Gertha Eudina Franklin Baucom. She worked for Weather Tamer as a seamstress for many years and was attending In Christ Fellowship Church.
Survivors include her husband of thirty-six years, Bennie M. Harris of Lewisburg; two daughters, Lisa (Jeff) Young and Dana Savage, both of Lewisburg; one son, Nabrin (Selena) Harris of Athens, AL; one brother, Jimmy (Glenda) Baucom of Chattanooga; eleven grandchildren, one niece, and two nephews.

Funeral services will be conducted on Saturday, March 14, 2015 at 3 PM in the chapel of Bills-McGaugh Funeral Home with Rick Stephens officiating. Burial will follow in Short Cemetery. Visitation with the family will be Saturday, March 14, 2015 from 1 PM until the funeral hour.
In lieu of flowers, please contribute to funeral expenses in care of Bills-McGaugh Funeral Home.

Bills-McGaugh Funeral Home & Crematory is in charge of the arrangements.
To order memorial trees in memory of Gloria Harris, please visit our tree store.