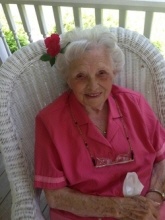 Gladys Marie Shaw Harrison, age 93 of Lewisburg, passed away on Tuesday, August 26, 2014 at her residence after an extended illness. Mrs. Harrison was born in Marshall County and was the daughter of the late Thomas Jefferson Shaw and Callie Harrison Shaw. She was also preceded in death by her husband, Leon Harrison, who passed away in 1995. Mrs. Harrison was employed at Moss & Barham's Men Store for many years and was a member of the Belfast Cumberland Presbyterian Church.

Graveside services for Mrs. Harrison will be held Thursday, August 28, 2014, at 5:30 PM at Lone Oak Cemetery in Lewisburg with Steve Thomas officiating. There will be no visitation prior to the service.

Bills-McGaugh Funeral Home & Crematory is in charge of the arrangements.
To order memorial trees in memory of Gladys Marie Harrison, please visit our tree store.