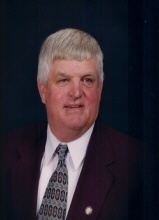 Gilbert Lewis Hunter, age 74 of Lewisburg, passed away on Monday, April 21, 2014 at his residence. A native of Marshall County, Mr. Hunter was the son of the late William Addison Hunter and Avis Whitehead Hunter. He was a 1957 graduate of Marshall County High School, served his country in the United States Navy, was a dairy farmer, former President of Marshall County Farm Bureau and councilman, and a member of Caney Springs United Methodist Church. In addition to his parents, he was preceded in death by his wife, Martha Christine Graves, who passed away in 1995 and his granddaughter, Toni Marie Hunter.

Funeral services for Mr. Hunter will be Wednesday, April 23, 2014, at 10 AM from the Chapel of Bills-McGaugh Funeral Home with Steven Christopher and Leland Carden officiating. Burial will follow in Lone Oak Cemetery with military honors. Visitation with the family will be Tuesday, April 22, 2014, from 4 PM until 8 PM at Bills-McGaugh Funeral Home.

In lieu of flowers, please make donations to the Ronald McDonald House or The American Cancer Society.

Bills-McGaugh Funeral Home & Crematory is in charge of the arrangements.
To order memorial trees in memory of Gilbert Hunter, please visit our tree store.