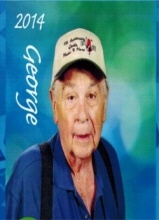 George C. Smith, Jr., age 76 of Lewisburg, passed away on Sunday, December 15, 2013, in Maury Regional Medical Center in Columbia. A native of Giles County, Mr. Smith was the son of the late George C. Smith, Sr. and Dimple Brown Smith. He was retired from Cosmolab and a member of New Life Community Church in Lewisburg.

In addition to his parents, he was preceded in death by a brother, Jimmy Brown Smith and a son, George Kenneth Smith.
He is survived by his long time companion, Larry Sue Smith; one son, Larry Keith (Debbie) Smith; one daughter, Kami Renee (Albert) Martin, all of Lewisburg; one sister, Betty Ann Russell of Pulaski; five grandchildren, two great-grandchildren, and several nieces and nephews.

In lieu of flowers, please make donations to The American Heart Association.

Bills-McGaugh Funeral Home & Crematory is in charge of the arrangements.
To order memorial trees in memory of George Smith, Jr, please visit our tree store.