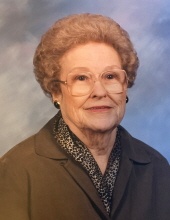 A Funeral Service will be conducted on Tuesday, January 21st at 10 AM at Bills-McGaugh & Hamilton Funeral Home with Reverend Mark Irvin officiating. Burial will follow in Bryant Cemetery. The family will visit with friends on Monday, January 20th from 4:00 – 7:00 PM at the funeral home.

Geneva Rose Wilkes was born in Lawrenceburg, Tn on October 18, 1920 to parents Henry Dalton Norton & Hattie Estelle Dooley.
Geneva is preceded in death by her parents Henry and Hattie Norton; her siblings Earl Grant Norton, Roberta Rollins, Reba Glendon, Harold Norton and Estelle Langley; her son Donald Royce Wilkes; and granddaughter Janice Lea Wilkes. She is survived by her brother William Norton of Huntsville, and sisters Joy Daughrity of Lewisburg and Barbara Edwards of Huntsville.
Geneva completed high school in Lewisburg in 1938. She met and married Thomas J. Wilkes by 1943 just as the United States entered WW2. They lived in New Jersey for two years where Thomas was stationed with the Army. Their first child Donald Royce Wilkes was born May 13, 1944 in Indiana.

They later moved to Ohio where their second son Michael W. Wilkes was born July 22, 1956. They returned to the south in 1962 to join the aerospace race in Huntsville, AL. Tom and Geneva moved one last time to Lewisburg in 1966 to open the Teledyne aerospace plant where Tom worked until his sudden death January 15, 1982.
Their first son Don, a renowned aerospace physicist, passed away July 6, 2006 from an extended illness. Geneva had two granddaughters from Don, Lynn Ann Marshall of Gulf Shores AL and Janice Lea Wilkes who tragically passed as a result of a chronic illness in 2004.

Geneva is survived by her son Michael who lives in Memphis, TN and is an owner of Memphis Motorwerks.

She also has two other granddaughters Cydney Allyse Wilkes and Jill Osborne, two great-grandchildren Levi Leeper and Leslie Rogers both residing in Huntsville, AL with their children, Geneva’s great great grandchildren Mary Allison, Field-Leeper and Kyle Ann Rogers.
Geneva had an enormous extended family notably, Terry and Rosarito (Chit) Hernando with daughter Jill (Daniel) Osborne who were like a daughter and granddaughter to her. Extended family includes many others, too numerous to name who came to make their lives in the US from the Philippines in the 70’s. Tom and Geneva acted as ambassadors to provide a home away from home environment for those individuals who immigrated here to fill the need for superior nursing health care in Marshall Medical Center.
Geneva will be cherished and remembered for her southern hospitality and kindness to accept all into her home.