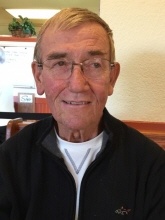 Gary (Red) Dean Hammond, 73, passed away on Sunday, May 20, 2018 at Cornerstone Hospice Center, The Villages, FL. Mr. Hammond was born on June 4, 1944 to Joe and Mary Hammond who preceded him in death. He was a graduate of the Class of '62 of Van Wert High School. He excelled in football during his high school years and was offered a scholarship to Ohio State. After high school he joined the Navy and served during the Vietnam War.

Gary is also preceded in death by his wife, Carolyn Frasier Hammond, whom he married on March 15, 1963, a son, Mark Travis Hammond and a daughter, Mary Hammond Rodriquez. He worked for Federal Mogal Corp. and International Comfort Products where he retired after 29 years. After retirement Gary left Tennessee and moved to Wildwood, FL and became an avid golfer. He also enjoyed hunting and fishing. Gary was a member of the Morrison United Methodist Church in Leesburg, FL.

A Graveside Service will be held on Saturday, May 26, 2018 at 1:00pm at Sunset Park Cemetery, 755 Yell Road, Lewisburg, TN with Rev. Frank Smith officiating.

A Memorial Service will also be held at the Continental Country Club, Wildwood, FL in the near future.