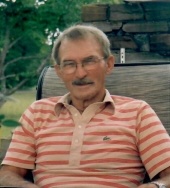 Frank O. Prewitt, age 86, passed away on Monday, May 7, 2018 in Maury Regional Medical Center, Columbia, TN. He was born on July 7, 1931 to the late Virgil O. and Ophall Cable Prewitt in Canton, Missouri. Mr. Prewitt was retired from Eden Electric and was of the Baptist faith. He served in the US Navy from 1948-1951 in San Diego, California. Frank was an avid gardener and enjoyed his guitar and banjo.

Along with his parents, he was preceded in death by his wife, Lorraine Portwood Prewitt, a son, James Prewitt, and a daughter, Patty Jacobson. He is survived by a step-son, Terry (Jennifer) Pruitt, Lewisburg, TN, and a son, Frank Prewitt, Jr., Caldwell, Kansas and two grandchildren.

Visitation with the family will be held in the Chapel of Bills-McGaugh & Hamilton Funeral Home on Thursday, May 10, 2018 from 11:30 AM until 2:00 PM with the Funeral Service to follow immediately after visitation. Burial will be in Sunset Park Cemetery with military honors.