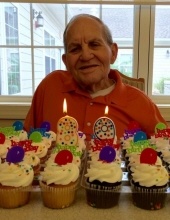 Floyd Edgar Neece, 89, of Lewisburg, TN, born August 11, 1927 passed away at his new home, The Hearth of Franklin on Tuesday, July 25, 2017. Mr. Neece is survived by his loving wife, Patsy Fumiyo Neece, two sons, Jimmy L. (Carol) Neece, Jacksonville, FL, Justin L. (Michelle) Neece, Franklin, TN, a daughter-in-law, Beth Neece, and seven grandchildren, Wesley, Laura, Amy, Abby, Kenadee, Jeremiah, and Molly Klare. He was preceded in death by his parents, Clive and Susie Whitehead Neece, a son, Frank Neece, and all of his siblings, Raymond, Mary, William, Charles, and Jesse Neece.
Floyd was born in McBurg, TN, Lincoln County, where he grew up on a farm. He enlisted and was placed into active duty for the United States Army, September 27, 1946, and served through the Korean War to an Honorable Discharge on January 16, 1953. After finally gaining approval from the U S government, he moved his new wife and son from Yokohama, Japan, back to Lewisburg, TN, Marshall County landing eventually at 1001 Cheryl Drive. Mr. Floyd or also known as Pappaw loved and served his wife in marriage for 66 years. He and Patsy were members of the First Cumberland Presbyterian Church of Lewisburg for over 50 years. He served as deacon, treasurer, and loved doing any construction work for the church. He retired from International Comfort Products (Heil-Quaker) in 1998 after serving as a welder for over 25 years. In January 2015 he and Patsy moved to The Hearth of Franklin, where he lived in Keepsake Village for over two years and was loved by everyone. His battle with dementia and Alzheimers was one of approximately eight years. He battled the disease like a soldier, always getting up after being knocked down, with honor, humility and courage. "His heritage to his children wasnt words or possessions but an unspoken treasure, the treasure of example as a man and a father." Will Rogers, Jr.
Visitation will be held with the family on Saturday, July 29, 2017 from 11:00 AM until 1:00 pm in the Chapel of Bills-McGaugh & Hamilton Funeral Home & Crematory. A Funeral Service will begin at 1:00 PM immediately following the visitation with Dr. Roger Reid officiating.
Notes of condolences may be sent to www.billsmcgaugh.com.
Bills-McGaugh & Hamilton Funeral Home & Crematory is in charge of the arrangements.
To order memorial trees in memory of Floyd Edgar Neece, please visit our tree store.