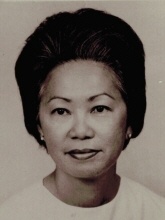 Evelyn M. M. "Marge" Hu Looney
Marge Looney died Friday, February 26, 2016 in Lewisburg TN. Born in Honolulu, Territory of Hawaii, she was the daughter of the late Yee-Sang and Daisy (Liu) Hu. In addition to her parents she was preceded in death by her three brothers, Smith, Edwin and Stanley Hu, and her grandson Creighton James Scheuchenzuber. Her husband of 60 years, Morris G. Looney, died August 30, 2011.
She was a 1941 graduate of McKinley High School in Honolulu and attended the University of Hawaii until the bombing of Pearl Harbor on December 7, 1941. An Army and State Department wife, she created homes for her family in a variety of locales - Honolulu; Carlisle Barracks, Pennsylvania; Fort Gordon, Georgia; Tripoli, Libya; Livorno, Italy; Fort Benjamin Harrison, Indiana; Teheran, Iran; Fort Meade, Maryland; Taipei, Taiwan, ROC; Vientiane, Laos and Lewisburg, Tennessee. She enjoyed exploring the culture and history of each country with the family taking excursions whenever they could. An enthusiastic gardener and avid reader, she also tended the dogs and goats on their farm. She was a parishioner of St John the Evangelist Catholic Church.
She is survived by four daughters, Evelynn (William) Putnam of Charleston, SC, Marilynn (Louis) Scheuchenzuber of Lewisburg, Theresa (Chung Man) Ng of Shanghai, China, and Kathleen (Alan) Smith, Lewisburg; seven grandchildren Kirill Putnam, Louis Grant and Gregory Sheridan Scheuchenzuber, Brady, Kaialani, and Katrina Ng, Daniel Wayne Closson; and four great grandchildren -Leo and Sloane Putnam and Daylon and MaKenzie Closson.
Visitation with the family will be held at St. John Catholic Church from 5-7 pm followed by a Funeral Mass, on Wednesday, March 2. Interment at Arlington National Cemetery will follow at a later date.
The family wishes to express their sincere appreciation to the staff of NHC Lewisburg and Village Manor, where she enjoyed their care, conversation and assistance, and Dr. Kanthi Narra and the employees of the Family Health Group for their help and guidance.
In lieu of flowers donations may be made to St. John Catholic Church, 1061 South Ellington Parkway, Lewisburg, TN 37091 or the Marshall County Memorial Library Foundation, P. O. Box 1201, Lewisburg TN 37091.
You may share your notes of sympathy with the family at www.billsmcgaugh.com.
Bills-McGaugh Funeral Home and Crematory in charge of arrangements.