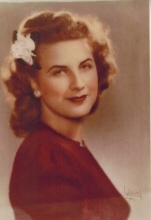 Mrs. Eudell Elizabeth Hatley DeVasure, age 91, passed away on Thursday,December 3,2015 at NHC-Merihil. Beth served in the WAVES in WWII and worked for USPS while living in California.She was a substitute teacher with the Marshall County School System for many years and later worked for NHC Lewisburg .She was a long time member of the First Assembly of God .
She was preceded in death by her parents, Sherrod A. Hatley and Evalena W. Hatley, husband, Bert T. DeVasure ( 1981). Also preceding her in death are five brothers, three sisters, and a daughter in law. She is survived by three sons, Bert B. DeVasure, John H.(Carolyn)DeVasure and Norman B. DeVasure. Two daughters, Mary J. D. Anderson-Saari(Robert), Paulette M.(Richard)Foster and one brother,James B. Hatley . Also surviving are 20 grandchildren, 26 great grandchildren and 12 great great grandchildren.
A graveside service for Mrs. DeVasure will be conducted on Sunday, December 6, 2015 at 3:00 PM at Rose Hill Cemetery in Columbia with Don McCullough officiating.
To order memorial trees in memory of Eudell Elizabeth Hatley DeVasure, please visit our tree store.