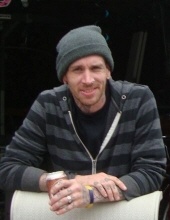 Eric John Gay, November 4, 1979-September 3. 2021, of Lewisburg TN, formerly of Commerce Township, MI has attained his angel wings. He leaves behind many people that love him. Loving husband for eight years of Sara Acevedo Gay. Beloved son of John Gay (deceased) of Kentucky, formerly from Michigan and Pam Coleman-Gay of Commerce Township, MI. He is the father of two daughters that have been adopted into loving homes. Eric was residing with his mother-in-law Luann Robinson at the time of his death.
Eric is survived by his siblings. His older sister, Alyson (Jeff Schmidt), his younger brother and sisters Adam (Carolyn), Katey, and Megan.
Loving uncle was a title that brought great joy to Eric. His nieces are Brianna Schmidt, Alanna and Sophia Gay. His nephews are Ian and Joshua Schmidt. That circle expanded when he married Sara. Keegan, Chase and foster niece Khora became very special to Eric. Keegan and “unkie” Eric became best buddies, fishing, riding four-wheelers fixing things around the farm and reading chapter books together. Reading together brought back childhood memories for Eric, as that was a favorite pastime that he shared with his mother.
Eric was preceded in death by his grandparents Ralph and Virginia Gay, of Florida, formerly from Royal Oak, MI and Eva Coleman, of Detroit, MI and Roger and Frances Coleman, of Royal Oak, MI.
As a boy and a youth Eric enjoyed being a Cub Scout and then a Boy Scout. He attainted the rank of Second-Class Scout. Camping and earning badges were some of the best parts of scouting for Eric. He is remembered as being helpful in the troop by former members.
Eric grew up attending Waterford Central United Methodist Church. He was active as a child and youth participating in Sunday School, Vacation Bible School, children’s handbell choir, children’s choir, participating in yearly cantatas and acting as an acolyte. Eric was the drummer for the summer praise worship services. He liked to joke that his parents were his roadies, transporting his drums to church for him. A task that his parents were proud to do.
Music was important to Eric throughout his life. He was a drummer in school from the fifth grade until the tenth grade. In high school Eric was in the marching band as well as band. He played the bass drum and the quads in the marching band making it easy to find him on the field.
Eric and his brother Adam, along with friends of theirs, created a garage band. The music that they played often brought the neighbors to the driveway to enjoy the impromptu concerts that they played. In addition to playing the drums, Eric played the guitar. He played electric, bass, acoustic and even the ukulele, all of these being self-taught. Eric played the harmonica and had been teaching Keegan to play.
While Eric does not have a traditional high school degree, he worked hard and obtained his GED. An accomplishment that he was very proud of.
Along with his musical talent, Eric was an artist on paper, using ink and pencils to create his drawings. He was also a tattoo artist, sporting several tattoos of his own.
Being a daredevil was in Eric’s blood. He lived that excitement on his bike and skateboard. Jumping them was something that he worked to perfect. Even spending time on the neighbor’s half pipe riding his skateboard. Weightlifting was pastime that he shared with his dad.
Eric survived a life changing car accident which should have seen his life come to an end. It caused physical and emotional scars that remained with him for the remainder of his life. While contemplating the reason for his survival Eric grew to understand that he was still here to be a loving influence and guide to those that he was living with.
Eric will be missed by his family and friends. His talent is lost to the world except as it comes from those that he shared his gifts with.

Eric's memorial service will be available to live stream or watch at a later time at https://waterfordcumc.org/.