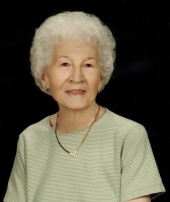 Mrs. Elizabeth R. Bryant, age 88 of Lewisburg, passed away on Friday, October 21, 2016, in Maury Regional Hospital in Columbia. Mrs. Bryant was the daughter of the late Ensley and Myrtle Martin Rainey. She was a retired factory worker from CPS and was a long time member of LifeSong Family Church in Lewisburg.
In addition to her parents, Elizabeth was preceded in death by her husband, James M. Bryant in 2013, three brothers, R. B. Rainey, Jody Rainey, and C. O. Rainey, and one sister, Lula Mae Mahon.
She is survived by two sons, William and Robert Bryant, both of Lewisburg, three sisters, Mary (Benton) Martin and Barbara Campbell both of Lewisburg, and Talitha (John) Williams of Franklin; two grandsons: Halen and Casey Bryant, and several nieces and nephews.
Visitation with the family will be held on Sunday, October 23, 2016, from 2 pm until 4 pm at LifeSong Family Church in Lewisburg and one hour prior to services. Funeral services will be conducted on Monday, October 24th at 11 am from the LifeSong Family Church in Lewisburg with interment to follow at 1:30 pm in the Anglin Cemetery in Williamson County.
Notes of sympathy may be sent to the family at www.billsmcgaugh.com.
Bills McGaugh Funeral Home and Crematory is in charge of the arrangements, 755 Yell Road; Lewisburg, TN 37091. Phone (931) 359-2521.
To order memorial trees in memory of Elizabeth Rainey Bryant, please visit our tree store.