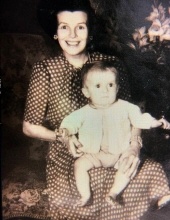 FUNERAL MASS WILL BE LIVE STREAMED VIA FACEBOOK AT 3 PM ON SATURDAY, APRIL 18, 2020.

My grandmother, Elizabeth Early Andrews, long-time resident of Lewisburg, Tennessee, passed away April 13, 2020, at the age of 101. Born during WWI, she lived through over 40% of US history. She grew up in Detroit, where her father owned Michigan Drilling Company and she said she knew Henry Ford. She was a WWII army nurse (Lieutenant Betty) and deeply religious. She would air-pop popcorn and melt butter on the stove and created a lifelong popcorn addiction in me. She also taught me the Heimlich maneuver, what evaporation was, to eat the end that sticks out of my sandwich, and to help an ant out with a crumb here and there. She encouraged me and my brothers to gallop horses, climb trees, and build zip lines. If we were injured, she would tell us to offer the pain up to God. She showed me The Exorcist at an early age and added her own layer of narration from behind my chair. She let us keep stray animals that wandered onto her farm and named them all Shep. She had a very distinctive siren-like call when we were still out digging for arrowheads and she thought it was getting too dark. She was the mother of 6 and usually called them all David before getting to the right name. She left behind over 40 grandchildren and many, many great grandchildren. Married to my grandfather over 60 years, I’ve missed her since she moved off the family farm after his death. My family all appreciates the great care my Aunt Miriam, Uncle John and all the Lademan cousins gave her in Annapolis these past 15 years.

She was preceded in death by her husband, William L. Andrews in 2005 and is survived by her children: Dr. William X. Andrews (Claudia), John E. Andrews (Sue), Joan Bell (Chris), Susan Brindle (David), David Andrews (Judy Condon), and Miriam Lademan (John), as well as a host of grandchildren and great grandchildren. Mass and burial will be private due to current pandemic.