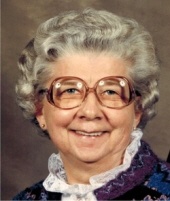 Eleanor (Witri) Fowler passed away Monday, September 2, at the home of her youngest son in Las Vegas, Nevada. Eleanor was born October 6, 1921 in Ravenna, Michigan to John and Marie Witri. She grew up on a farm with six sisters and two brothers. She graduated from Ravenna High School and then enrolled in the Hackley Hospital School of Nursing for a three year degree of Nursing. She served her country during World War II as a 2nd Lieutenant in the Army Nurse Corps and saw active duty in the Pacific. Eleanor married Howard Fowler on December 6, 1947. She gave birth to four children, Ronald, James, Philip, and Jackie. Howard and Eleanor lived together in Virginia, Tennessee, Alabama, Florida, and in a foreign location of Managua, Nicaragua in Central America.

She is survived by her three children, three grandsons, two granddaughters, and one great granddaughter. She was preceded in death by her husband and her eldest son, Ronald.

Eleanor was active in the many communities in which she lived. Whether working as a nurse in the health industry or in volunteer activities in local community churches, Eleanor was seen as a kind and caring person. She will be remembered as a great listener with good ethical values and gave much of herself to her husband, children, and community. She enjoyed life's simple pleasures and loved to travel and interact with people.

A graveside service will be held September 14, 2013 at 11:00 AM at Beechwood Cemetery in Cornersville, Tennessee where she will be laid to rest next to her husband.
To order memorial trees in memory of Eleanor Fowler, please visit our tree store.