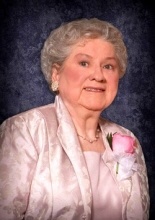 Edwina Wolaver passed away on December 9, 2013, in Birmingham, Alabama, at the age of 84. Born on May 18, 1929, Edwina was a long-time resident of Marshall County and the surrounding area, and a member of the Hickory Heights Church of Christ in Lewisburg. She graduated from Marshall County High School in 1947, and Columbia Business College in Columbia, Tennessee in 1948. She worked as a bookkeeper/accountant for many years in Lewisburg, Nashville and Huntsville. She married Robert C. Dew, Sr. of Latta, S.C. in 1948.

After retiring from the Redstone Arsenal in Huntsville, Alabama, in 1989, Edwina pursued her interest in Genealogy and playing in a womens recreational golf league.

Funeral services for Edwina Wolaver will be held on Thursday, December 12, 2013, at 1 PM from the Chapel of Bills-McGaugh Funeral Home in Lewisburg with Tom Sumners officiating. Burial will follow in Short Cemetery in the Spring Place Community. Visitation with the family will be Thursday from 10 AM. until 12:45 PM.

Bills-McGaugh Funeral Home & Crematory is in charge of the arrangements.
To order memorial trees in memory of Edwina Wolaver, please visit our tree store.