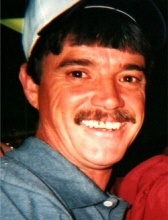 Eddie Wayne Blackwell, age 53 of Lewisburg, passed away on Sunday, October 26, 2014 at Alive Hospice in Nashville. A native of Marshall County, Mr. Blackwell was the son of the late Bobby Blackwell and Linda Fay Curtis Blackwell from Lewisburg who survives. He was also preceded in death by one granddaughter, Dixie Lynn Blackwell.

Mr. Blackwell was self-employed as a roofer and was a member of the Church of Christ faith.

Funeral services for Mr. Blackwell will be held Wednesday, October 29, 2014, at 1PM in the chapel of Bills-McGaugh Funeral Home with Linda Price officiating. Burial will follow in Short Cemetery. Visitation with the family will be Tuesday, October 28, 2014 from 4 PM until 8 PM and again on Wednesday beginning at 11 AM until the funeral hour.

Bills-McGaugh Funeral Home & Crematory is in charge of the arrangements.
To order memorial trees in memory of Eddie Blackwell, please visit our tree store.