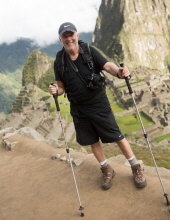 Dr. William Xavier Andrews died at his home Saturday night, May 23, 2020 surrounded by his family. He was the son of the late William L. and Elizabeth Early Andrews and born in Detroit, Michigan, on November 14, 1945. Their family of 6 children was raised on their Lewisburg farm and homes in Nashville, TN.

Bill was a graduate of Father Ryan High School, St. Louis University, and MTSU. His undergraduate years were interrupted when, although firmly anti-war, he volunteered for duty in Vietnam, hoping to prevent his younger brother, also in the army, from having to go. During the 1969 Ho Chi Minh birthday offensive, he precipitously lost his hearing in a nighttime rocket attack which killed his friend, John Love.

After the army, he completed his bachelor and master’s degrees in political science and history and lived in Spain, while doing historical research on the Spanish civil war.
Bill married Claudia Sainz in 1974. The joys of his life included teaching history for 30 years at Columbia State Community College, completing his doctorate, writing, tennis, re-enacting, reading, travel and horseback adventures, and his beloved sons and grandchildren.
He is survived by his wife Claudia Sainz Andrews, MD; sons Matthew (Samantha), Will (Breanna), and Glennon (Jordan) Andrews; grandchildren Sophia, Matilda, Leighton, and Elliott Andrews; his siblings John (Sue) Andrews, Joan (Chris) Bell, Susan (David) Brindle, David (Judy Condon) Andrews, and Miriam (John) Lademan as well as many other cherished relatives, friends, and former students; and his animal friends Mr. Darcy, Katzenberger, and Rafa.

A private family funeral mass will be held Friday, May 29, 2020, at 2 p.m. at St. Catherine’s Catholic Church and will be live-streamed via the Bills-McGaugh & Hamilton Funeral Home & Crematory Facebook Page. Burial will follow at Liggett-Andrews Cemetery in Lewisburg, TN.

In lieu of flowers, donations may be made to Columbia State Community College Foundation at Columbiastate.edu/ClementFoundingFaculty or the Maury County Animal Shelter. Please honor Bill by voting in November, not based on one issue only, but on the return of character, empathy, morality, diversity, and honesty in government.