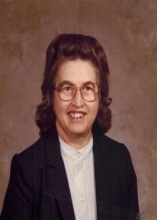 A native of Detroit, Michigan, Mrs. Young was the daughter of the late Virgil Harris Brown and Kathleen Darnell Williams, and the step-daughter of the late, Joe L. Williams. She was married to Vinson Young, Jr., who passed away in 2003. She was a graduate of Columbia Business College, a senior citizen volunteer, and a member of Farmington United Methodist Church.

Survivors include one son, Ronald B. Young of Lewisburg, two brothers, Marvin (Julia Ann) H. Brown of Athens, Alabama and Allen (Charlotte) Williams of Scottsboro, Alabama; one sister, Emogene (Wayne) Spivey of Lewisburg; a grandson, Gregory (Wendy) B. Young of Lewisburg, two great granddaughters, Alexiss and Jordon Young of Lewisburg, two great-step grandsons, Rusty Fuller, Tylor Fuller and his friend, Hannah Oneal, and a great-great step-grandchild, Brantley Fuller, and several nieces and nephews.
Funeral services for Mrs. Young will be conducted on Sunday, January 19, 2014, 2013, at 2 PM from the Chapel of Bills-McGaugh Funeral Home with Rev. Leland Carden officiating. Burial will follow in Andrews-Liggett Cemetery. Visitation with the family will be Saturday, January 18, 2014 from 4 PM until 8 PM and again on Sunday from 12 Noon until the funeral hour.

You may sign Mrs. Young guest registry at www.billsmcgaugh.com

Bills McGaugh Funeral Home & Crematory is in charge of the arrangements.
To order memorial trees in memory of Dorothy Young, please visit our tree store.