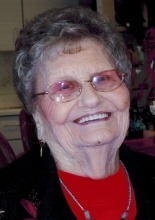 Mrs. Dorothy Blackburn age 86 of Lewisburg, passed away on Saturday, November 29, 2014 in Marshall Medical Center. Mrs. Blackburn was a native of McNairy County and was the daughter of the late Troy Hall and Lilly Smith Hall. She was a homemaker and a member of the First Assembly of God. In addition to her parents, she was preceded in death by two husbands, Frank Simmons and Burnis Raymond Blackburn along with two brothers and two sisters.
She is survived by four sons, Larry ( Joyce) Simmons of Belfast; Dennis ( Christine) Simmons of Beach Park, Ill; Dallas ( Toni) Simmons of Diamond Bar, CA and Marty Blackburn of South Bend, Indiana. Five Grandchildren, Seven Great Grandchildren and Three Great Great Grandchildren.
Funeral services for Mrs. Blackburn will be conducted on Wednesday, December 3, 2014 at 11:00 A.M. from the chapel of Bills-McGaugh Funeral Home. Burial will follow in Lone Oak Cemetery. Visitation with the family will be on Tuesday, December 2nd from 4 P.M. until 8 P.M. at the funeral home.
To order memorial trees in memory of Dorothy Blackburn, please visit our tree store.