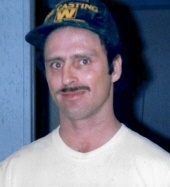 Donnie Whitehead, age 56, passed away at The Waters of Shelbyville, in Shelbyville, TN on Thursday, April 26, 2018 . Donnie was a native of Marshall County and a retired employee of Walker Die Casting and Trison Coating. He was born on December 4, 1961 to the late Odie Whitehead, Sr. and Dorothy Chilton Whitehead and was of the Baptist Faith.

Family and friends will visit in the Chapel of Bills-McGaugh & Hamilton Funeral Home on Monday, April 30, 2018 from 10:00am until 1:00pm. The Funeral Service will begin immediately following the visitation. Burial will be in the Whorley Cemetery. Pallbearers will be Joel Flores, Daniel Flores, Andy White, Odie Whitehead, Jr., William Whitehead, and Billy Joe White.

Bills-McGaugh & Hamilton Funeral Home & Crematory is assisting the family with their arrangements.
To order memorial trees in memory of Donnie Whitehead, please visit our tree store.