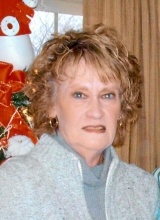 Diane Wilkes 'Luna' Lunn, age 77 passed from this life on Saturday, February 17, 2018 in Maury Regional Medical Center, Columbia, TN. A lifelong resident of Lewisburg, TN she was born to the late John and Hazel Downing Wilkes on March 17, 1940. She was also preceded in death by her first husband, Gaynes Luna, second husband, John R. Lunn, and a sister, Joy Woodard.

Diane was active with her children's education volunteering with the PTA and acting as Room Mother. During her life she was the manager of the Ridgetop Apartments, Henry Horton State Park Inn, was a florist and was involved in jewelry sales. She loved music, her family and her cats.

Visitation with the family will be held on Monday, February 19, 2018 from 4:00 PM until 8:00 PM in the Chapel of Bills-McGaugh & Hamilton Funeral Home. A Funeral Service will be held in the same location on Tuesday, February 20, 2018 at 1:00 PM with Jeremiah Tatum officiating. Burial will be in the Middle View Cemetery, Lewisburg, TN. Pallbearers will be Joe Gordon, Jonathon Kimbrough, Mike Luna, John C. Luna, Jeff Tucker, and Keith Kimbrough.

In lieu of flowers, donations may be made to the Marshall Co. Memorial Library or the Lewisburg Animal Shelter.

Condolences may be sent to the family at www.billsmcgaugh.com.