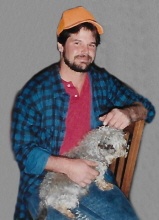 David Wayne DeRidder, age 56, passed away on Friday, April 20, 2018 in Lewisburg, TN. David was born on April 21, 1961 in Denville, New Jersey to William A. and Betty Ann Green DeRidder. He was a self-employed carpenter. David loved animals, antique vehicles and was an avid fan of the Tennessee Titans.

Visitation for family and friends will be held on Friday, April 27, 2018 from 4:00pm until 8:00pm in the Chapel of Bills-McGaugh & Hamilton Funeral Home. A Funeral Service will be held on Saturday, April 28, 2018 at 11:00am at the same location. Buddy Pope, minister of Richland Cumberland Presbyterian Church, will be officiating.