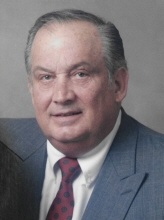 Dan P. Whitaker was born January 4, 1933, in Coldwater, Tennessee, the son of the late Joe C. Whitaker and Annie Hayes Whitaker, and departed this life on August 8, 2017, at the age of 84. His family has called the State of Tennessee home for well over two-hundred years. He was preceded in death by his first-born son, Daniel P. Whitaker, II (Elaine), a sister, Helen Whitaker Raby, and two brothers, Joe Hayes Whitaker and James Robert Whitaker. He is survived by his loving wife of 64 years, Gwendolyn Coble Whitaker, and children, Joseph Coble Whitaker (Rebecca), Tracy Whitaker Allen (William), Mary Gwen Whitaker, Robert Lane Whitaker (Jennifer), and Alisa Kettunen Warner (Howard). Also surviving him are his grandchildren, John Franklin, William Sharp, Daniel Phillip, Joseph Coble, William Forrest, Rachel Lane, Howard Stuart, Charles Trey, Latham Reid, Evelyn Claire, and Hutton Matthew, along with four great-grandchildren, and numerous nieces and nephews.
Mr. Whitaker served in the United States Air Force during the Korean Conflict. He graduated from Lincoln County High School prior to attending Memphis State University for his pre-law studies. He received his Juris Doctor degree from Vanderbilt University in 1962, where he was a member of the Vanderbilt Law Review.
In 1963, he moved to Lewisburg to begin the practice of law with Shelby Haywood, forming the law firm of Haywood and Whitaker. He engaged in a busy practice and established a reputation as a fierce trial lawyer and dedicated advocate, serving the Marshall County community and the State of Tennessee for 52 years. He also served as legal counsel for the Lewisburg Water and Wastewater Board for 31 years.
Mr. Whitaker was a member of the Tennessee Bar Association, the Marshall County Bar Association, the Elks Club, served on the Board of Professional Responsibility of the Supreme Court of Tennessee, and was a member of the Lewisburg First United Methodist Church.
A Visitation will be held at Bills McGaugh & Hamilton Funeral Home on Friday, August 11, 2017, from 5:00 p.m. until 7:00 p.m., and a Memorial Service will be held on Saturday, August 12, 2017, at the First United Methodist Church, beginning at 11:00 a.m., with an additional Visitation beginning at 10:00 a.m.
Notes of condolences may be sent to www.billsmcgaugh.com.
Bills-McGaugh & Hamilton Funeral Home & Crematory is in charge of the arrangements.
To order memorial trees in memory of Dan P. Whitaker, please visit our tree store.