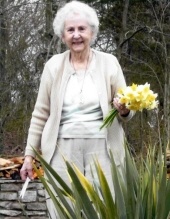 Cora Mayberry McLean McCullough, 89, passed away at her residence on Monday, September 17, 2018 in Lewisburg, TN. She was born on March 1, 1929 to her parents Will and Eleanor McLean on the family farm on Yell Road. She was their fifth child during the time the Great Depression loomed large on the horizon. Cora grew up on the family dairy farm working and playing along with her five siblings. A quick study, she started school early, accelerating in English and History. She met her soul mate, Bob McCullough, in the 8th grade and per tales of lore, they held hands at the movies. Later that year, Bob was helping re-roof her house, when Cora popped up the ladder with fresh, cold lemonade . . . that sealed the deal! Cora graduated from Marshall County High School in 1946 and following her older sister Martha, moving to Los Angeles to pursue a degree in Fashion Design from Woodbury College. She spent two years there, but the lure to come back to Bob was greater. They married in 1948, while Bob was finishing his studies at Cumberland College in Lebanon, TN.

Like most couples in the 1950s, Bob and Cora spent the decade working and building a family. By 1959, they had five children. Bobs job at Venus Esterbrook and then later Faber-Castell Pencil Company kept him busy traveling and entertaining. On more than one occasion, Cora had to entertain multiple clients on a moments notice. She never failed to deliver. Her southern charm and sweet demeanor, not to mention her excellent cooking, could win even the toughest customer over.

In addition to being able to pull off a meal on a dime, Cora was an excellent seamstress, making designer clothes for herself and her children for many years. She was a member of the First United Methodist Church, played bridge for many years, and traveled widely with Bob.

In lieu of flowers, memorials can be made to the Mary Farley Center at the First United Methodist Church in Mrs. McCullough's memory.