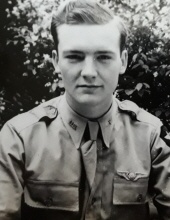 A Graveside Service for Mr. Conrad Cyril Mehlenbacher will be conducted on Monday, April 5th at 11 AM at Sunset Park Memorial Gardens with Brother Lesley Shadrick officating. Military honors will be provided by the United States Army. Bills-McGaugh & Hamilton Funeral Home is honored to assist the family with arrangements. Condolences may be extended to the family online at www.billsmcgaugh.com
Friends always joked to my Dad that “when your ship comes in, you’ll probably be at the airport.” Conrad Cyril Mehlenbacher is rejoicing today in his heavenly home, he peacefully passed on the evening of March 30th, 2021. During WWII, he fought with the Mighty 8th Air Force. He also served during the Korean War. He had many different occupations throughout his lifetime, but it was his kindness to others that makes us proud to call him Dad. A man of God, he lived by the instructions of our Lord and Savior to “do unto others as you would have others do unto you.” Growing up I always heard him say, “pain builds character.’ Reminding us that all things work together for the good of those who love the Lord.
He was a hard worker and could do anything he set his mind to do. He has many hobbies throughout his lifetime. One of my mother’s favorite memories is of the rally races they enjoyed together during their yearly years. He loved sailing and flying planes, horseback riding, fishing, hunting, woodworking, and welding to list a few. When we finally convinced him to retire at the age of 72, he began cattle farming on the land he cleared years earlier with his dedicated friend A.G. Burgess and an axe. I’ve never met a man like my father, so precious and kind. He was fiercely independent, refusing to use a cane, even at the age of 97. He was our “cowboy from New York” stoic and strong. He was also an avid reader, with a creative imagination, always telling bedtime stories to his 5 children, 7 grandchildren, and 3 great-grandchildren.
It’s unfathomable that anyone could sum up an entire lifetime of love and adventures in only a few paragraphs, what’s said here can only give a glimpse into who he was and what he meant to us. He was a wonderful husband, a loving father, and a good friend to many.
Survivors include by his wife, Clara Ann Jordan Mehlenbacher, children: Dr. Conrad Cyril Mehlenbacher IV (Marica) , Mary Charlotte Mehlenbacher Hall (Kenneth), Robert W. Mehlenbacher (Rachel), and Melanie Holt (Richard). He is also survived by seven grandchildren: Sawyer Mehlenbacher; Jessica Hall Murphy (Michael); Connor and Claire Mehlenbacher; Cody Freeman (Caitlen), Zoie and Aiden Holt. He leaves four great-grandchildren: Arianna Frances and Conrad Christopher Murphy; Luna Freeman and Luna’s soon-to-be-born brother. He is preceded in death by a son, Jordan Alan Mehlenbacher.
To order memorial trees in memory of Conrad Mehlenbacher, please visit our tree store.