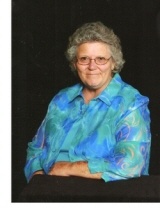 Mae was a native of Lewisburg and member of Lewisburg First Church of the Nazarene. She was born to Samuel Robert Cummings & Ruby Lucille (King) Cummings Alexander who both preceded her in death. She was also preceded in death by her step-father William Paul Alexander and son Kenneth Wayne Baker.

Mae was also blessed with a very loving extended family with lots of nieces, nephews, cousins, & many special friends.

Funeral Services will be conducted on Monday, August, 27, 2012 at 11:00 A.M. from the chapel of Bills-McGaugh Funeral Home. Burial to follow in Lone Oak Cemetery.

Visitation with the family will on Sunday evening from 4:00 to 8:00 P.M. at the funeral home

In lieu of flowers Mae has asked that donations be made to the Food Pantry at Lewisburg First Church of the Nazarene, P.O. Box 2083, Lewisburg, TN 37091

Online condolences can be sent to the family at www.billsmcgaugh.com

Bills-McGaugh Funeral Home is in charge of the arrangements for Mrs. Chilton
To order memorial trees in memory of Clara Chilton, please visit our tree store.