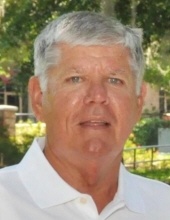 A private graveside service will be conducted at Round Hill Cemetery in Belfast.

Born September 21, 1943 in Lewisburg, Tennessee, he was the son of the late Christopher Leo Bussart and the late Mary Gertrude (Mam) Woods Bussart. Chris and his older brother, Walter Woods Bussart, were raised in Belfast and Lewisburg.

Chris was a natural at everything he did; hunting, fishing, baseball, pool and golf. He set the course record at Henry Horton Golf Course, scoring a 61. He was runner-up in the Tennessee State Amateur Tournament in Nashville and played on the golf team at UT.

Chris was a 1961 graduate of Marshall County High School and attended the University of Tennessee and Memphis State University. In Memphis he met Nancy Nell Little, his loving wife. They shared 57 wonderful years together, raising two sons, David Christopher and Robert (Rob) Allen Bussart. They moved to Orlando, Florida, where Chris started Architectural Openings, Inc., a hollow metals company, which manufactures doors and windows for jails and prisons. Through hard work, the company was very successful. When Chris became disabled Rob took over until his death. David now runs AOI.

In Florida, golf gave way to deep sea fishing as a family activity. Chris, David and Rob fished many tournaments, including the annual Green Turtle Cay Marlin event in the Abacos, Bahamas.

Chris loved being with his family on his boat, The Nan Sea Bee, high above the deck on his Captain’s perch.

In addition to his parents, Chris was preceded in death by his younger son, Rob Bussart, at age 48.

The family would like to express special thanks to his caregivers, Analyn Cabansag and many friends and neighbors, especially Ove and Lorraine Nedergaard who helped Nancy take wonderful care of him during his long illness.

Condolences may be sent to the family home 2333 Carolton Rd. Maitland, Florida 32751.

Donations may be made in memory of Chris to the Parkinson’s Association of Central Florida, P.O. Box 3337, Winter Park, Fl. 32790, or online at http://www.parkinsoncf.org/donate

Chris lived life to the fullest, loved his family and friends, and the Tennessee Vols. We mourn his death and celebrate the way he lived his life.