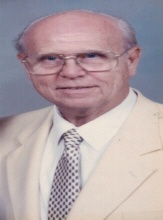 Charles Joseph Peter, Jr., age 95, was called home to be with his Lord, Wednesday, April 13, 2016 at NHC-Oakwood.
Mr. Peter was a native of Chicago, Illinois and made his home in Lewisburg for the last 4 years. "Chuck" was a commercial artist in Chicago and continued doing artwork throughout his retirement. He was a veteran of World War II and served in France and Germany under General George Patton. As a young man he earned the rank of Eagle Scout and served many years as a Scoutmaster for the Boy Scouts later in life. He was a member of the Lutheran Church.
In addition to his parents he was preceded in death by his wife of 56 years, Virginia E. Peter and also by two grandson, Joseph Burks and Jason Medel both of Lewisburg, TN.
He is survived by two sons, Dr. Chuck (Sharrin Lusco) Peter of Lewisburg and Erik (Natsuko) Peter of Pleasanton, California; five grandchildren, PFC Jacob Peter, Joshua Peter both of Lewisburg, TN, Alex Peter, Adam Peter and Alyssa Peter of Pleasanton, California and one great grandchild, Nova Michelle Peter of Culleoka, TN.
No services are planned.
Notes of sympathy may be shared with the family at www.billsmcgaugh.com.
Bills McGaugh Funeral Home and Crematory is in charge of the arrangements.
To order memorial trees in memory of Charles Joseph Peter, Jr, please visit our tree store.