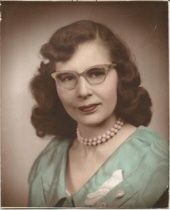 Biography Catherine Avrit Klein, age 83 of Albertville, AL passed away on Wednesday, November 16th, 2011 at The Medical Center in Bowling Green, KY. A native of Columbia, TN, she was the daughter of the late Walter Burnie Avrit and Rosa Belle Smith Avrit. She was married to Lewis Leo Klein who died in 1981. She was a homemaker and member of the Church of Christ.

In addition to her husband and parents, she was preceded in death by her stepmother Jennie Mae Avrit, three brothers Carl, Burnie, Bobby Avrit and one sister Nannie Margaret Avrit.

Funeral services for Mrs. Klein will be Sunday November 20th, 2011 at 2:00 p.m. from the chapel of Bills-McGaugh Funeral Home with Jim Taylor officiating. Burial to follow in Lone Oak Cemetery. Visitation with the family will be Saturday November 19th, 2011 from 4 P.M. to 8 P.M. at the funeral home and Sunday after 11:00 A.M.
To order memorial trees in memory of Catherine Klein, please visit our tree store.