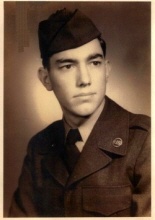 Bryant Reavis Harris, age 83 of Lewisburg, passed away on Thursday, October 23, 2014 at Sterling House Assisted Living in Columbia. A native of Columbia, Mr. Harris was preceded in death by the late T. Earl Harris and Martha Reavis Harris. In addition to his parents, he was preceded in death by firs first wife, Barbara R. Harris, and two brothers, Thomas E. Harris and Robert D. Harris.

Mr. Harris was a 1949 graduate of Marshall County High School and served his country in the United States Air Force for twenty-one years.

Funeral services for Mr. Harris will be held Tuesday, October 28, 2014, at 10
AM at Bills-McGaugh Funeral Home with Mark Irvin officiating. Burial will follow in Lone Oak Cemetery. Visitation with the family will be Monday, October 27, 2014 from 4 PM until 8 PM.

Bills-McGaugh Funeral Home & Crematory is in charge of the arrangements.
To order memorial trees in memory of Bryant Harris, please visit our tree store.