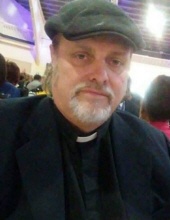 A Celebration of Bruce’s life will be held at a later date. Condolences may be extended online at www.billsmcgaugh.com.

Born on May 10, 1961 in Framingham, Massachusetts, he was the son of the late John Wright and the late Eva Sue Tenney Wright. He was the Pastor and Excuative Director of Refuge Ministries Tampa Bay and the Director of the Poor People’s Economic Human Rights. Mr. Wright was a member of Lewisburg First Presbyterian Church.