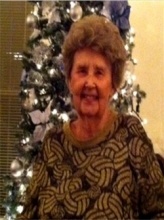 Brownie McCoy Holley, age 85 of Lewisburg, passed away on Thursday, December 19, 2013, at NHC Healthcare-Lewisburg. A native of Lincoln County, Mrs. Holley was the daughter of the late Burr McCoy and Adell Hughey McCoy and the wife of the late Tom Holley, who passed away in 1998. She was also preceded in death by a sister, Ruth McCoy. She retired from Cosmolab, a former employee of Genesco for thirty-two years, a 1947 graduate of Cornersville High School, and a member of Lifesong Family Church.

She is survived by one "daughter", April Childers of Cornersville and two cousins from Hendersonville.

Bills-McGaugh Funeral Home & Crematory is in charge of the arrangements.
To order memorial trees in memory of Brownie Holley, please visit our tree store.