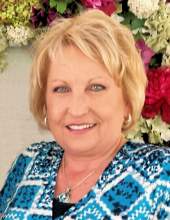 Mrs. Brenda Osteen Wolaver, 58, resident of Cornersville and Executive Officer at First Farmers & Merchants Bank, died on Monday, April 19, 2021 at her residence after a courageous battle with cancer.

A Graveside Service will be conducted on Thursday, April 22nd at 1:30 PM at Short Cemetery in the Spring Place Community with her brother-in-law, John Beard, officiating. The family will visit with friends on Thursday from 11:00 until 1:00 at Bills-McGaugh & Hamilton Funeral Home.

A lifelong resident of Lewisburg, Brenda was born on December 27, 1962 to the late Bill Osteen and the late Frances Lovette Osteen. She was a 1981 Marshall County High School graduate. On April 27, 1987, she married her beloved husband, Terry Wolaver. Brenda was a longtime employee and Executive Officer with First Farmer & Merchants Bank. She was a past president of the Marshall County Chamber of Commerce, and for many years a volunteer coordinator for the local March of Dimes. Her favorite thing to do was hiking, and staying at Fred Oakley’s cabin near Gatlinburg.