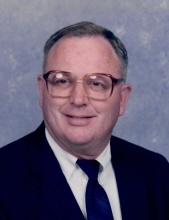 Bobby Lyons Jones, age 78, passed away at his residence on Monday, March 19, 2018. Bobby was a native of Lewisburg born to the late Paul R. and Ruby Lyons Jones on September 19, 1939. He served in the US Army and was an employee of Walker Die Casting. He enjoyed watching tractor shows and attending tractor pulls.

Visitation with the family will be on Wednesday, March 21, 2018 from 5:00pm until 8:00pm in the Chapel of Bills-McGaugh & Hamilton Funeral Home. The Funeral Service will be held in the same location on Thursday, March 22, 2018 at 11:00am with Pastor Jeff Parrott and Billy Spivey officiating. Burial will follow in Mars Hill Cemetery in Lynnville, TN. Pallbearers will be James Mullins, Mitchell Osborne, Larry Osborne, Joe Wakham, Mike Gentry, and Frank Cook. Honorary pallbearers will be Billy Spivey, Barry Spivey, and John Hickman.