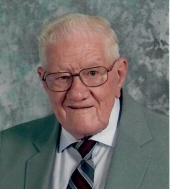 Billy Dean "Dehota" Richards, age 96 passed away on Tuesday, November 14, 2017 at his residence in Lewisburg, TN. He was born on December 24, 1920 to the late Gleason and Hassel Jefferies Richards in Marshall County, TN. He spent his life as a self-employed retailer on Finley Beech Road. Watching old westerns and fishing were his favorite hobbies.
Along with his parents, Dehota was preceded in death by his wife, Ruth Richards, brother, Thomas (Rooster) Richards, and two sisters, Kathleen Bennett and Martha Moore. He is survived by two daughters, Kay Richards, Lewisburg, TN, Barbara (Ricky) Hopwood, Arizona, sister, Nell Scott, Farmington Community, and four grandchildren.
Visitation with the family will be on Thursday, November 16, 2017 from 4:00 PM until 8:00 PM in the Chapel of Bills-McGaugh & Hamilton Funeral Home. The Funeral Service will be on Friday, November 17, 2017 at 11:00 AM at the funeral home. Burial will follow in the Lone Oak Cemetery.
Notes of condolences may be sent to the family at www.billsmcgaugh.com.
Bills-McGaugh & Hamilton Funeral Home & Crematory is assisting the family with their arrangements.
To order memorial trees in memory of Billy Dean Dehota Richards, please visit our tree store.