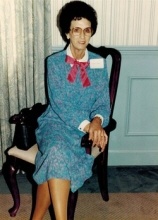 Betty June Slagle, age 84 of Columbia, formally of Lewisburg, passed away on Sunday, October 26, 2014 at Life Care Center in Columbia.

Mrs. Slagle was the daughter of the late Hobert Moore and Clara Davis Moore. She was also preceded in death by her husband of sixty years, Ernest Slagle, who passed away in 2008; one brother, Don Moore and one sister, Peggy VanZant.
Mrs. Slagle was a homemaker and a member of First Baptist Church in Lewisburg.

Funeral services for Mrs. Slagle will be held Tuesday, October 28, 2014, at 2 PM in the chapel of Bills-McGaugh Funeral Home with Bro. Paul Woodford officiating. Burial will follow in Lone Oak Cemetery. Visitation with the family will be Monday, October 27, 2014 from 5 PM until 8 PM and again on Tuesday beginning at 1 PM until the funeral hour.

Bills-McGaugh Funeral Home & Crematory is in charge of the arrangements.
To order memorial trees in memory of Betty Slagle, please visit our tree store.