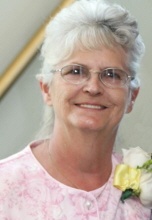 A Funeral Service will be conducted Monday at 2:00 P.M in the Chapel of Bills-McGaugh & Hamilton Funeral Home. The family will visit with friends on Monday from 11:00 A.M. until service time at the funeral home.

Born on September 11, 1944 in Detroit, Michigan, she was the daughter of the late Fred Hall and the late Lilly Anglin Hall. She was a Godly woman, a mentor to many, but most importantly a loving mother, grandmother and great grandmother.

In addition to her parents, she is preceded in death by husband, Joe Spry, Jr.; daughter, Bonnie Thomasma; brother, Joe Hall; and grandsons, Jason Medel Burks and Joseph Burks.

BILLS-MCGAUGH & HAMILTON FUNERAL HOME & CREMATORY is assisting the family with cremation arrangements. Condolences and memories may be shared with the family online at www.billsmcgaugh.com
To order memorial trees in memory of Betty J Hall Spry, please visit our tree store.