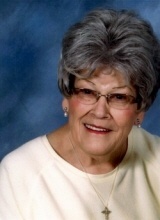 Betty Joan Farmilo England, age 80 of Lewisburg, passed away on Sunday, May 11, 2014 in NHC Healthcare-Lewisburg. A native of Ferndale, MI, Mrs. England was the daughter of the late Tom Farmilo and Dorothy Dowty Farmilo. Also preceding her in death is her son, Gary England; twin sister, Barbara Farmilo; brother, Richard Farmilo, and sister, Margie Boyd. She was a homemaker and a member of First Baptist Church in Columbia.
She is survived by her husband of 55 years, James Jim England of Lewisburg and two brothers, Tom Farmilo of South Bend, IN and Bob Farmilo of Goshen IN.
Funeral services for Mrs. England will be held Thursday, May 15, 2014, at 1 PM in the Chapel of Bills-McGaugh Funeral Home with Carl Price officiating. Honorary pallbearers will be the Billy Kimbrough Sunday School class at First Baptist Church in Columbia, Dan and Candace Nixon, Sally Evans, and Geraldine Beatty Reese. Burial will follow in Sunset Park Cemetery. Visitation with the family will be held Wednesday, May 14, 2014 from 4 PM until 8 PM at Bills-McGaugh Funeral Home.
In lieu of flowers, please make donations to Samaritans Purse, 801 Bamboo Road, Boone, NC 28607 www.samaritanspurse.org.
Condolences of sympathy may be sent to www.billsmcgaugh.com.
Bills-McGaugh Funeral Home & Crematory is in charge of the arrangements.
To order memorial trees in memory of Betty England, please visit our tree store.