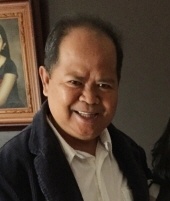 Bernardo Yumul passed away at Vanderbilt Hospital in Nashville, TN on May 2, 2016. He was born in the Philippines on August 20, 1957 to the late Jose and Rosalina Yusi Yumul.
He is survived by his wife, Ma Belen Baluyut Yumul, one son, Bernard Yumul, two daughters, Blossom Yumul, Brittney Yumul, two brothers, Moises Yumul, Reynaldo Yumul, and four sisters, Remedios Bautista, Victoria Rebancos, Magdalena Bodner, and Isabel Haynes.
A private memorial will be held at a later date for Mr. Yumul.
Notes of condolences may be sent to www.billsmcgaugh.com.
Bills McGaugh Funeral Home and Crematory is in charge of the arrangements.
To order memorial trees in memory of Bernardo Yumul, please visit our tree store.